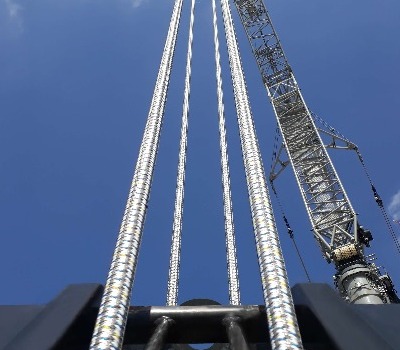 The special cover of a soLITE® rope has no load-bearing function, but serves primarily to help users recognize the rope's discard point and to protect its core. The visible sequential wear of the differently colored fibers reflects the progress of the deterioration of a soLITE® rope up to its discard point. Once the signal red core becomes visible – which can also be seen clearly from the crane cab – it is very likely that the rope will have to be discarded soon. As soon as the core is fully exposed, the rope must be discarded even though safety is still reliably ensured at that point. In the event that the number of bending cycles on the crane is also documented, the digital calculation of the life span makes a required subsequent rope change easier to predict so that it can be scheduled optimally. Using soLITE® relegates unexpected, costly downtimes to the past. This redundantly protected system helps achieve the best possible levels of safety and availability for construction site, crane and service staff. In fact, they are better than with commercially available steel wire ropes which, usually, are only subjected to visual inspections.

At present, the discard point of a steel wire rope is determined based on a number of possible discard criteria. The most common criteria are broken wires, local damage, deformations, and corrosion. In many cases the residual breaking force of the steel wire rope at the time of reaching the discard point is used in order to measure the residual safety and to verify these discard criteria. However, depending on type of use and rope construction, this provides only limited information about the actual residual safety to the total failure of the rope.

The FEM 5.024 standard released in 2017 defines guidelines "for the Safe Use of High Performance Fiber Ropes in Mobile Crane Applications", especially with regard to their discard point. It neutralizes the main criticism in connection with the use of fiber ropes on cranes, i.e., that they provide insufficient possibilities to detect their discard state.

This standard represents a hitherto unavailable safety standard for the use of high performance fiber ropes whose rationale and comprehensiveness even eclipses that for steel wire ropes. Throughout the ENTIRE duration of a fiber rope's use – from its installation to its discard point – the rope's condition must not fall below a defined safety factor 3, and every fiber rope must be discarded no later than after 40% of its sustainable bending cycle life. soLITE® is constructed such that, even in the light of such stringent requirements, its use at  construction sites makes sense economically.

The comparison between steel wire and soLITE® ropes dispels all doubts

The direct comparison between a steel wire rope and a soLITE® fiber rope as regards criteria used to determine the discard point demonstrates not only that there exist quantifiable discard criteria for both technologies, but also that soLITE® comes out ahead in this comparison.