One of the main questions in the rope world is “Is my rope still good to work with?” Manufacturers specify a theoretical service life in their instructions for use. This is mainly based on very rare use. The actual service life, especially when the rope is heavily used, depends on a lot of factors that are beyond the control of manufacturers. In this series, TEUFELBERGER presents the results of a study made on “Deliberate damage of ropes”. In this article, we answer some frequent questions on the impact that dirt has on the strength of the ropes.

In these tests, a mix of 3 liter water and 1.3kg standardized dirt according to DIN ISO 9462-2007 (loam, mud, sand, gravel) were used. The rope samples were submerged in the dirt-water-mix, the dirt was rubbed onto the samples and then samples were pulled over pulleys for 10 times to fix the dirt and simulate application.

Pic.2: Braided Safety Blue 12.7 mm before and after treatment

The following ropes were tested in each sampling group: 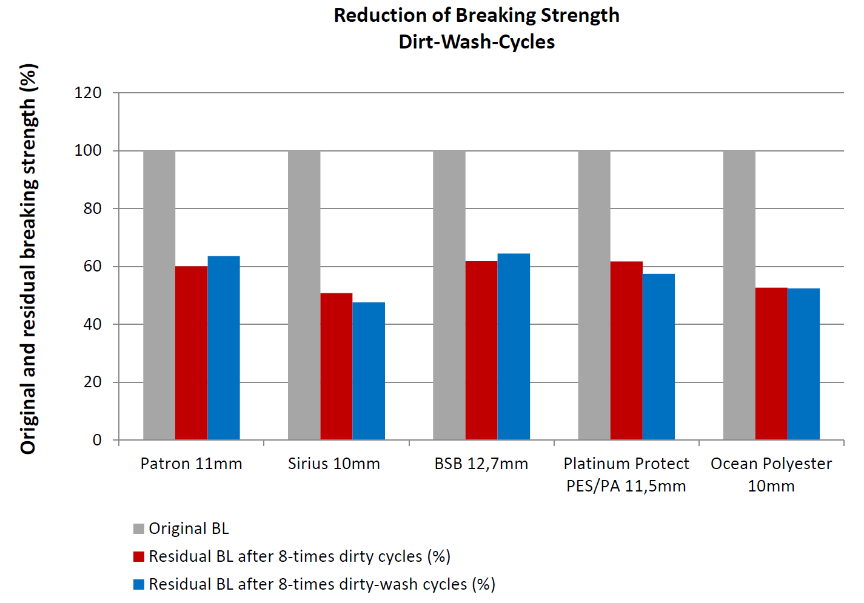 The tests show, that dirt harms the rope significantly. The loss of breaking strength was at around 40% to 50% on all rope samples. This implies that the dirt enters inside the rope and damages the load bearing core from the inside. The degree of damage is not visible from the outside. Fine grained dirt like sand should therefore be avoided if possible.

The tests also show that washing can’t „repair“ the rope as soon as dirt enters into the core. Even after washing with a rope detergent, the harming dirt remained in the core and caused damage.